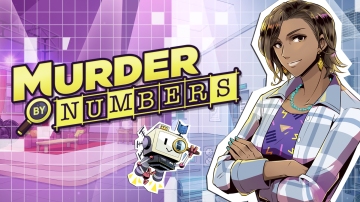 We often talk about retro games on this channel but today, let’s talk about a brand new one. No, this isn’t a sponsored episode, just a look at a wacky new game from some top talent in the industry. Today’s game is Murder by Numbers, developed by Mediatonic and released on PC and Switch in 2020.

Murder by Numbers takes place in the mid-90’s where an actress, Honor Mizrahi, finds herself in the midst of a murder investigation. As the victim had just fired her moments before his death, she’s a top suspect and must solve the case in order to prove her innocence. Beside her is a robot named SCOUT, who had been tossed away and has no memories of their time before Honor found them.

Murder by Numbers takes the Phoenix Wright games and adds a 90’s flair to them. Honor must interrogate strange characters in order to find information and solve the case. Along the way, the player must solve various nonogram puzzles, which players of the Picross games will be familiar with. By solving nonograms, Honor will uncover evidence and piece together clues. Each case gives players a ranking based on the puzzles they have completed, the amount of hints they needed, and the time it took to complete them. Higher rankings unlock bonus puzzles and additional backstory for SCOUT.

Murder by Numbers takes significant influence from Phoenix Wright in its story but also in its sound, with the score for the game composed by Phoenix Wright composer, Masakazu Sugimori. The characters for the game were designed by creator of the cult classic game Hatoful Boyfriend, and the story was partially written by Ed Fear, the writer of Swords of Ditto.

Murder by Numbers has not been out long but so far holds a Very Positive rating on Steam and many players enjoyed the tone of the game, if not the plot itself. While many state that it’s not the best visual novel or puzzle game, the hybrid is enjoyable and pushed many players on past the conclusion.

Thank you so much for listening and thank you to Paws for requesting today’s episode! If you’d like to request a game to be talked about on the show, head over to Twitter and send me a message @vg_oftheday. Archives and transcripts are available on videogameoftheday.com. Don’t forget to check back here tomorrow for another Video Game of the Day!