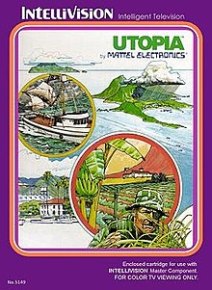 I’ve been hovering around the 90’s and 00’s for a little while so why don’t we go back a bit further today and talk about a console that many of today’s gamers have likely never even seen, let alone played: the Intellivision. While the pre-8-bit consoles are often known for arcade style games and hi-score chasers, that doesn’t mean that’s all that existed on these consoles. Today’s game was one that would lay the groundwork for many of today’s most popular strategy games. Today’s game is Utopia, developed by Don Daglow and released on the Intellivision in 1981.

Utopia is a two player game where each player gets to control one island on an overhead map. They are in charge of this island and must build it up through buildings and infrastructure. By building up your civilization, you gain points. Each player moves in real-time with each round of the game lasting between 30-120 seconds. The players can set the number of rounds they want to play. At the end of the game, the player with the most points wins.

While you mostly focus on building up your own civilization in Utopia, that doesn’t mean that you can’t influence your opponents. Along with building farms and fishing boats for your people, you can use your gold to fund rebel activity on the enemy’s island. If they don’t make sure to keep their people happy with enough housing and food, they could suffer rebel attacks which can destroy buildings and lower their score. Fishing boats can also be attacked so keeping a line of PT boats can help defend them from enemies.

Utopia is relatively simple by today’s standards but it clearly influenced several genres we enjoy today. The city builder, 4X, and real-time strategy genres all have roots in Utopia. It isn’t easy to find Intellivision games today but Utopia did see some renewed life on Microsoft’s Game Room for the Xbox 360. Unfortunately, those licenses have expired so Utopia cannot be purchased through that service any longer. If you are fortunate enough to still have working Intellivision hardware, Utopia can be found online for only a few dollars as of this recording.

Thank you so much for listening! If you liked today’s show, please leave us a review on Amazon. It really helps us grow and find new listeners. Archives and transcripts for every episode can also be found at videogameoftheday.com. Don’t forget to check back here tomorrow for another Video Game of the Day!