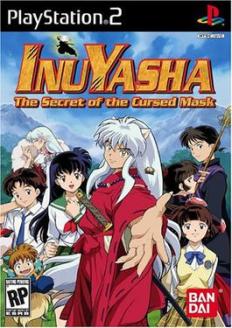 The Playstation 2 has sold more systems than any other video game console in history. Due to the massive market share, we saw a lot of experimentation on the console and thus, the Playstation 2 has many unique games on it. We also saw a sudden influx of video games based on anime, which often weren’t localized for western audiences previously. Today’s game is based on one of the most popular animes in the early 00’s. Today’s game is InuYasha: The Secret of the Cursed Mask, developed by Quintet and released on the Playstation 2 in 2004.

If you aren’t familiar with InuYasha, here’s a brief run-down. The story follows Kagome Higurashi, a girl from modern Japan who is the reincarnation of a priestess from the distant past. Kagome discovers a well that allows her to travel back in time to this distant past where she adventures with a half-demon named InuYasha to collect shards of a sacred jewel that grants extraordinary powers. The anime adaptation went on for nearly 200 episodes and had four feature length movies as well, so not a bad run.

InuYasha: The Secret of the Cursed Mask has players choose to play as either a male or female character who is also sent back to feudal Japan and happens upon InuYasha fighting some demons. They join up when InuYasha recognizes the character’s clothing as being like Kagome’s and many fan favorite characters show up to help the player character return home to Japan.

The game plays like a JRPG with many of the tropes seen throughout the genre. Random battles are frequent and have players enter a battle screen where they can choose their character’s attacks from a menu. The battle system actually resembles that of the Grandia series, with character’s speeds moving them up a waiting bar and then their attack choice dictating how quickly they will attack. Players can also select combo attacks where multiple party members use a special attack together. Many of the InuYasha characters have their special attacks from the show such as InuYasha’s Iron Reaver Soul Stealer.

While the story is non-canon to the series, the English voice actors from the show do lend their talents to this game so fans of the series may find something to love in this game’s one-off storyline. Others though are unlikely to find much to love here. Critics gave the game mixed reviews, criticising the extremely slow loading times and high encounter rate, causing battles to take significantly longer than they need to. The graphics and presentation also look dated, even for the Playstation 2, with the game more closely resembling a Playstation 1 title. InuYasha fans did step up to the plate for this one, despite the criticisms and they were rewarded with two more InuYasha tie-ins after this one. Unfortunately, though, fans of Quintet weren’t quite so lucky. The developer, previously known for SNES classics like Terranigma, Illusion of Gaia, and ActRaiser would never make another RPG again after InuYasha: The Secret of the Cursed Mask.

Thank you so much for listening! If you like this show and like hearing about video games, maybe you want to hear about modern games too? If you do, open up your favorite podcast app, search for The Gaming Observer, and give our new podcast a try! It’s called The Gaming Observer Podcast and each week, Adrian Simple and yours truly talk about the latest gaming industry news, predict where we’re going, and talk about the games we’re each playing. It’s a lot of fun and I really think you’re gonna like it. Don’t forget to check back here tomorrow for another Video Game of the Day!